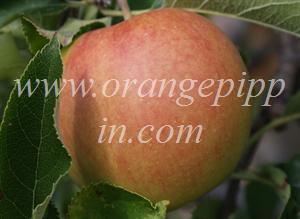 Jonagold is high quality American apple, developed in the 1940s. As its name suggests, this is a cross between a Jonathan and a Golden Delicious. It is quite widely grown, and unusually for a Golden Delicious cross, is not limited to the warm apple regions, although it is not often found in the UK.

The colouring is yellow of Golden Delicious, with large flushes of red. This is a crisp apple to bite into, with gleaming white flesh. The flavour is sweet but with a lot of balancing acidity - a very pleasant apple.

Jonagold's other parent, Jonathan, is an old American variety which was discovered in the 1820s.

In the UK Jonagold sometimes appears in supermarkets in the spring packaged as "value" apples, often from Holland, and at a very low price.  We are trying to find out more about these apples, but it seems that they are mainly "second" quality apples which are nearing the end of their storage life and are surplus to other uses.

Jonagold is widely-grown by commercial growers, and there are a number of more highly-coloured sports.  Jonagored is probably the most widely known of these.  Others include: Decosta, Primo, Rubinstar, Red Jonaprince.