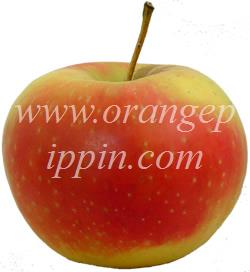 Ariane is a very new apple variety, developed in France, and the first commercial orchards were only planted in 2002. Like all new commercial varieties it is the subject of extensive marketing. The publicity material rather clumsily makes much of the link with the Ariane space rocket (launching into orbit etc.), with which it shares a name, but not much else.

The origins of Ariane are a good illustration of the changes that modern scientific techniques have brought to apple breeding programmes. Many famous apple varieties of the 19th and 20th centuries were developed by what might be called single-generation crosses of interesting varieties. In contrast Ariane has been developed through a series of more than 30 laboratory-reared intermediate generations. One of the original grand-parents is Rome Beauty a popular American multi-purpose apple variety originating in the 19th century - but after 30 generations the link might seem rather tentative. Other varieties in the mix include Florina, Prima, Semis Golden.

One of the main reasons for this lengthy breeding programme is the desire to develop an apple with a built-in genetic resistance to some of the more common apple diseases such as scab (la tavelure in French). Scientists have identified a gene called Vf which is found naturally in the Japanese flowering crab apple (Malus floribunda, a cousin of Malus domestica the species to which most edible apple varieties belong) and confers resistance to apple scab. Crab apples have traditionally been used as pollinators in apple orchards, and cross-breed with apples in the wild. A number of well known apples such as Egremont Russet also have strong resistance to scab and this may have arisen naturally from cross-pollination with crab apples in the past. However in Ariane this process has been carried out scientifically and in a few decades rather than by chance over hundreds of years.

The great advantage of apples with genetic resistance to diseases like scab is that they need less pesticide and fungicide sprays during the growing season. (Standard treatment for non-resistant apples could require up to 15 fungicide sprays a year) This offers growers the possibility of lower production costs, makes it easier to grow the apples commercially in organic regimes, and is likely to be appreciated by consumers who are concerned about inappropriate use of chemicals in agriculture. However an important problem with disease resistant apples with the Vf gene is that the resulting fruit quality has often been disappointing. Breeders have struggled to produce apple varieties which retain the disease resistance of the crab apple yet are easy to grow in modern orchards, and above all are appealing to consumers.

Despite this apparent handicap, in appearance and flavour Ariane does very well. The apple has a very attractive bright crimson flush over a golden green background, flecked with attractive tiny patches of russet and pronounced lenticels. Perhaps surprisingly the shape, slight russeting, and especially the strong red coluring of its distant grandparent Rome Beauty are still very much there in Ariane. The base of the apple is noticeably inverted, quite similar to Court Pendu Plat. The flesh is fairly dense, cream-coloured, and not particularly juicy. The flavour is very acceptable - there is a hint of pear-drop, neither too sweet or too sharp. Ariane is best served slightly chilled.