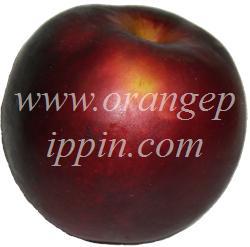 Possibly raised by a settler called John Crawford in Arkansas, USA in the 1840s, and certainly widely grown in Arkansas and Missouri later that century.  It is thought to be a seedling of Winesap.  This apple is notable for the extremely dark coloration, which becomes almost black after storage.  The photo shows an Arkansas Black apple taken in March, having been harvested in October.

We are indebted to Monique Reed of Texas for the photo and following descriptive information.

"Now, this is supposed to be a very tart, crisp apple and a good keeper. I'd have to say it must mellow enormously in storage, as the one I had was firm and sound, but not especially crisp and not at all tart. (I'm guessing it's near the end of its storage life, since harvest is in fall.) The skin at this stage is extremely waxy.  As advertised, the flesh is medium-pale yellow. It was pleasantly sweet and tasted almost as if it were an apple already prepared to go in a dessert--as if it were a tart apple with sugar (and something else? honey?) added, and perhaps a bit of vanilla near the outside and faint but definite almond undertones nearer the core. There was more going on, taste-wise than in a Red Delicious or your average Fuji--more depth, as in many of the older cultivars. Good apple. Not my favorite, but more interesting than many others."

Further information - see the Encylopedia of Arkansas History and Culture.