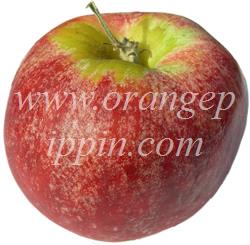 Gravenstein is an attractive high-quality dessert and culinary apple, first described in 1797. It is well-known in the USA and northern Europe, and is still grown commercially on a small-scale.

Gravenstein is a triploid variety and as is often the case with such varieties, produces a large vigourous tree with dark thick leaves.  Possibly because of its triploid nature Gravenstein seems to have a greater degree of variability than most varieties.  There is also a red "sport" known as Red Gravenstein, where the red coloration is more pronounced (and we think less interesting).

Gravenstein is a relatively hardy variety and can withstand difficult conditions - by European standards.  In North America where summers are often hotter and winters much colder, it has a reputation for being fussy, and undoubtedly does best in areas where the climate is closer to the milder winters and cooler summers of northern Europe.

The real problem with Gravenstein is that it is prone to many diseases and therefore has never achieved the popularity it deserves.  As so often in the world of apples, it seems that the apples with the best flavor are often the most difficult to grow.

Not surprisingly for such an old variety, the origins are uncertain.  It is most closely associated with Denmark, and although widely known as "Gravenstein" in English-speaking countries, an alternative name is "Graasten" since it is thought the mother tree was raised at Graasten Castle in southern Jutland, Denmark.

We are grateful to Johnny Olsen of Vejle, Denmark for the following information:

We are also grateful to Bill of Vancouver Island for pointing out some excellent Gravenstein identification photos on his website: mars.ark.com/~squeeze/apl-pics/grav.html