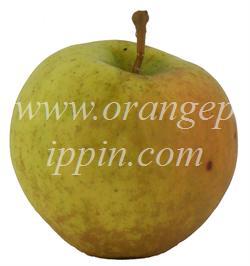 Golden Russet is a small moderately attractive apple, which keeps well, and is very versatile for eating, cooking or juicing.  The flavor is typical of a russet apple but rather more intense than the traditional English St. Edmunds Russet or Egremont Russet - more similar to Ashmeads Kernel.

The origins of Golden Russet are not clear but it arose in upstate New York in the 19th century, possibly derived from an English russet variety.  The flavor and slightly flattened shape suggest a connection with to Ashmeads Kernel, which has always been grown in the USA.  However there is also a variety with the name Golden Russet in England, described by the English Pomologist Robert Hogg in the late 19th century.  His description of the apple and its qualities are very similar to the American Golden Russet, yet he makes no mention of it being grown in the USA, even though he was aware of and described many other American varieties.

For a time Golden Russet was grown on a commercial basis but then fell out of fashion.  It has enjoyed a resurgence of interest because the strong-flavored juice is ideal for cider and hard cider production.