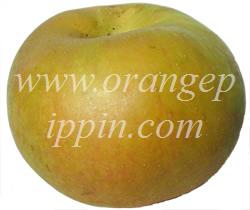 An old nondescript green russeted apple, originating in the 1700s. The appearance is, let's be honest, not especially attractive. Ashmeads Kernel is lumpy, mis-shapen, and rather small. The underlying bright green skin is entirely covered in russet. Russet can be very appealing- think of the dull golden glow of Egremont Russet for example - but somehow on Ashmead's Kernel it just looks plain dull.

Yet appearances can be deceiving. Ashmeads Kernel has remained popular for well over 2 centuries, and with good reason: it has a distinctive flavour which is quite different from most other varieties. Tasters rarely agree on exactly what the elusive flavour reminds them of, but pear drops is probably close.

It is perhaps no surprise that Asmeads Kernel does not seem to be related to any of the mainstream apple varieties, although one of its probable cousins - Duke of Devonshire - is also quite well known.  The name "kernel" suggests that this variety was discovered as a chance seedling.

Ashmead's Kernel is a versatile apple, not just for eating fresh, it can also be used for salads and cooking, and it is a highly-valued apple for juicing and hard cider.

Ashmead's Kernel is also one of a very small band of apple varieties from the Old World that succeeded in the New World.  When the first settlers arrived in North America they brought with them tried and tested varieties from Europe, yet few adapted to the very different climates of North America and most of the early successful American apple varieties were chance seedlings which evolved in America.  However Ashmead's Kernel did thrive, and today holds a position of respect on both sides of the Atlantic - it will never be a mainstream variety and placed alongside almost any modern variety, Ashmeads Kernel looks completely outclassed. But in the flavour stakes this old-timer holds its own.