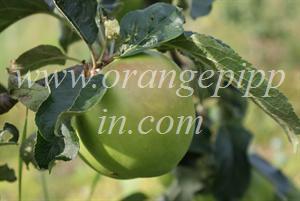 England is the only country where a major distinction is made between cooking and dessert apples, but these days only one variety remains to maintain the tradition of English cooking apples - the famous Bramley apple. However before the supermarket era the choice was wider, with a whole range of culinary or cooking apple varieties grown, each with their own characteristics and season. Chief amongst the early cooking apples is Grenadier, which ripens by mid-August in the UK.

Not much is known of the origins of Grenadier, but it was discovered during the mid-19th century in England and was quite widely grown by the end of the century, although it is no longer grown commercially.

Two reasons probably account for Grenadier's fall from favour. Firstly, like all early apple varieties it does not store particularly well, a serious drawback for modern distribution methods. Secondly, it is not the most attractive of apples - it is a lumpen green, often with a pronounced ribbed effect. However, this ugliness is transformed in the pot, where it easily cooks down to cream-coloured puree with a superb apple flavour. Grenadier is also a good base for apple jam.

Grenadier is also quite an easy apple tree to grow in the garden, being reliable, resistant to the common apple diseases, and not likely to grow as vigorously as a Bramley.  Growing your own is also the easiest way to get over its poor keeping qualities, as you can pick it over a number of weeks.

So if you want to make a light English-style apple pie for a summer picnic then Grenadier is exactly what you need.