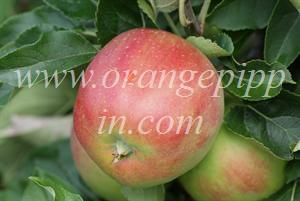 George Cave is an early English apple, ripening in early/mid August.  It has a pleasing appearance, and like many summer apples can vary in colour from its basic green/yellow colour to all-over red depending on where the apple is exposed to the sun.

The flavour is typical of early English apples, lacking any of the aromatic qualities found in later season varieties, and basically just tasting of "apple".  The main distinguishing feature of the flavour is that it is somewhat stronger and more intense than other early season varieties.  The flesh has some crispness straight from the tree and is moderately juicy, but softens within a few hours of picking, and becomes dry and mealy within a few days - this is an apple that is at its best on the day of picking.

George Cave is not widely-grown, but it retains a following and many fruit tree nurseries list it in their catalogues, and the apples are sometimes available from small farms and orchards.