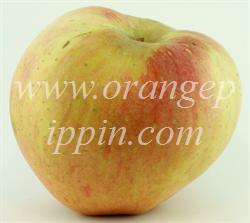 A well-known American cooking apple, notable for its large size.  Wolf River is mainly used for cooking, and it keeps its shape when cooked.  It is fairly sweet and doesn't need much sugar added.

Wolf River has a very high natural resistance to the disease apple scab, and good resistance to fireblight and mildew.  It is also very cold hardy, making it a good choice for growing in the northern part of North America.