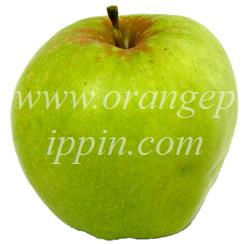 Known as Mutsu in its native Japan and in the USA, Crispin looks like a large Golden Delicious and indeed one of its parents is Golden Delicious so it has that lovely sweet honeyed flavour.

It cooks superbly too and the women picking them in our local orchard used to call them 'oven busters' - take a big one home and bake it and you have a feast for two - and you don't need many for a deep apple pie.

Crispin is one of a small number of varieties which really is dual purpose - being both pleasant as a dessert apple (albeit too large for 1 person) and versatile in the kitchen.