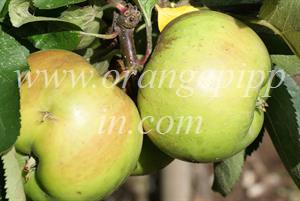 Bramley's Seedling is without doubt the definitive English cooking apple, and in terms of flavor ranks as one of the world's great culinary apples.  Although England has produced a large number of excellent "cookers", Bramley is so dominant that the others are largely forgotten.  Most cooks reach automatically for the trusty Bramley, and it is equally prevalent in commercial apple bakery products in the UK.  Its key feature is the very high level of acidity, and the excellent strong apple flavour it lends to any apple dish.

In England a clear distinction is made between "eaters" and "cookers".  English apple cookery usually calls for apples which cook to a puree - and the intense acidity of Bramley's Seedling guarantees the lightest and fluffiest of purees.  This contrasts with the traditions of other countries, notably France and the USA, where cooks often prefer apples which keep their shape in cooking.  For this reason Bramley's Seedling is not as well-known outside England as some of the other popular English apple varieties.  It is quite widely planted in gardens in Denmark (where by 1938 it was considered to be the 4th most popular variety grown) and is now becoming popular in the USA as a result of increasing interest in English apple varieties.

Bramley's Seedling trees are extremely vigorous - at least a size larger than most other apple varieties on any given rootstock.  They are quite easy to grow, and have attractive crimson blossom.  The only complication for gardeners is that Bramley's Seedling is a triploid variety, with three sets of genes instead of the more usual two.  As a result it needs two different pollinating apple trees nearby to ensure successful pollination.

They are also notably long-lived.  2009 was the 200th anniversary of the discovery of Bramley's Seedling, and - remarkably - the original tree was still alive in the same garden in Nottinghhamshire, England, where it was planted as a pip by a young girl, Mary Ann Brailsford, 200 years before.  It takes its name from a subsequent owner of the house, a Mr Bramley who allowed a local nurseryman to propagate it in the 1850s on condition that it was given his name.