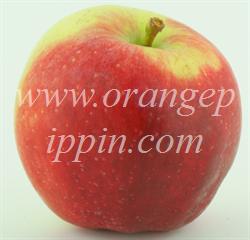 Liberty was developed at the famous Geneva Research Station in the 1960s.  It is derived from Macoun, and is very much a McIntosh-style apple, with red skin and juicy flesh.  The flavor is well balanced, perhaps sharper than many of the Mac-related varieties but still with the characteristic vinous note.  Its other parent is an un-named research variety derived from Malus floribunda, from which it inherits resistance to scab.

It is grown quite widely in the eastern US, and is being promoted as a good variety for the backyard grower.

There is some evidence that Liberty is a triploid variety, with 3 sets of chromosomes instead of the usual 2 - or perhaps a partial triploid.  However it does not possess many of the typical features seen in triploid varieties (such as large size and vigour).