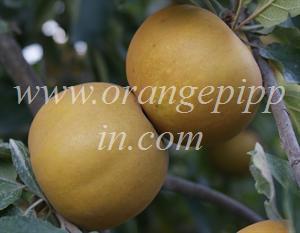 Saint Edmund's Pippin is a typical English russet apple - sometimes known as Saint Edmund's Russet.  It is very similar to the more widely-known Egremont Russet.  Its season is slightly earlier and it does not keep particularly well.  The flavour however is arguably richer than Egremont Russet, and the flesh seems juicier - it is not necessarily a better apple, but fans of russet apples tend to think the flavour is superior.

Although a tendency to russeting is a feature of many apple families and varieties (including Golden Delicious and Cox's Orange Pippin), those varieties which exhibit heavy or complete russeting such as Saint Edmund's Pippin are clearly closely related to each other in some way - although interestingly very little is known about the parentage of any of the classic russet varieties.  However these russet varieties are often very good varieties for the garden - the trees generally grow in a neat fashion and have very good disease resistance, and tolerate a wide range of growing situations.

Again like several other russet varieties, Saint Edmund's Pippin produces a good juice and can be used for cider production.