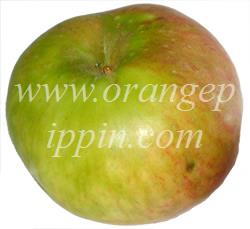 Annie Elizabeth is an old-fashioned English cooking apple, possibly a seedling of Blenheim Orange, which it resembles in shape and size, and also in its relatively sweet flavour.

This is one of the best apple varieties for any recipe which calls for an apple which keeps its shape when cooked - interesting, given that Blenheim Orange cooks to a puree.

It is also an easy variety to grow in the garden, fairly resistant to most of the usual diseases and tolerant of the wet mild climates often found in northern Europe.  A notable feature is the attractive purple blossom.