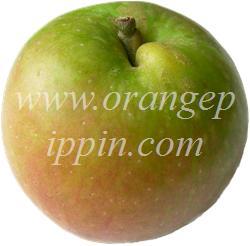 Northern Greening is a very old English apple, already widely-grown by the early 19th century.  It was rated by the Victorian author Hogg as "an excellent culinary apple of first-rate quality" and it cooks to juicy puree.

Whilst one disagrees with Hogg at one's peril, it is perhaps safe to say that its descendants have a better flavour when cooked.  The true importance of Northern Greening lies in its historical significance, as it is the probable parent of Dumelow's Seedling which was in turn one of the most influential Victorian culinary apples.

Northern Greening is in some ways a more "primitive" apple than other culinary apples of the Victorian era.  It has a rather un-prepossesing appearance, and is smaller than the norm for a cooking apple.  However it has the key qualities necessary in a cooking apple: it stores very well (a crucial attribute before the advent of refrigeration), it has a good acidic flavour (the base of all English-style apple cooking), and the tree is very reliable, disease resistant, and productive.  These qualities, along with better size and visual appearance, are to be found in many of its descendants.