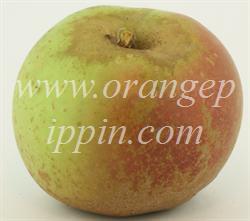 D’Arcy Spice is an old apple variety originating near Colchester, Essex, prior to 1800. D'Arcy Spice is a rather slow-growing tree that is fairly tolerant of relatively poor soils, sandy soils, windswept areas and salty air - conditions in which many apples will not thrive. However, on poor soils, a strong rootstock would be required – such as MM111 or M25. The tree flowers mid-season, often on the tips of branches, but also on a moderate number of spurs. Blossom is the usual pink buds, becoming almost white once the flowers are open. The substantial amount of tip-bearing of the fruit gradually weighs down the upright branches and transforms the tree from a very upright shape, into the more normal spreading shape associated with apple trees.

D’Arcy Spice has a reputation for somewhat variable cropping from one year to the next in many parts of the UK and has a distinct preference for being grown in the warmer and drier East or South East, with the best fruits usually being produced on relatively drier, warmer and poorer soils.

Although D’Arcy Spice is officially stated to be self-incompatible, it usually has a good pollination rate for its flowers and will sometimes produce seedless fruits. Fruits are average size, somewhat knobbly at the base, mostly dull green, with patches of light brown russet and a dull purplish-red sunny side. The skin is quite tough which is probably what gives the fruits some resistance to scab and insect damage. In windy weather, the fruits cling to the tree, with few windfalls.

The fruit is picked very late in the season - often early November. In cooler or less sunny parts of the UK, the fruits may not ripen properly and therefore may be poorly flavoured; failing to achieve the flavour which makes this variety famous. When first picked, the apples are hard and sharp-tasting, with a reasonably tough skin. The storage qualities are very good, with fruits often remaining in good condition until the following spring. Historically the fruits would be stored for a month or two before they became edible. The mature fruits will also tolerate being lightly frosted without apparently being damaged, while the previous season’s windfalls can often be found lying in the grass in late winter, looking as fresh as the day they fell off the tree in the previous autumn. During storage, after a good year, the fruits sweeten and become a pleasant flavour, with hints of "sweet spice" rather like mince-pie filling (apple, cinnamon and raisins) which gives the variety its name.

In addition to the trees tolerance of relatively poor growing conditions, D’Arcy Spice has some useful resistance to diseases - the fruits have some resistance to scab and insects, although the leaves are easily scabbed by heavy rainfall and its already-slow-growing tendency will be slowed even further in wetter parts of the UK, as a result of leaf damage caused by scab. D’Arcy Spice also has a good level of resistance to powdery mildew; a disease which is common on poor soils of the kind where D'Arcy Spice may grow. It also has some tolerance to canker infection. Due to the slow-growing nature of this variety, it is best grown on a stronger rootstock than would normally be used to achieve the desired tree size, although it may continue growing after its companion trees have reached mature size, resulting in D'Arcy Spice eventually becoming almost average in size. D’Arcy Spice is probably not suitable for a one-tree garden, but may be useful as the late-keeping part of a balanced collection of several trees intended for almost year-round apple supplies. Such a collection might include one early-ripening eater, one early-mid cooker, one mid-season eater, one late-season cooker and two late-keeping eaters.

All in all, D'Arcy Spice is an unusual apple variety.  Some researchers have speculated that it might be a haploid (single set of chromosomes) rather than the more usual diploid (two sets of chromosomes) of most apple varieties.  This might explain its slow growth, poor pollination of other varieties, and the frost resistance of the blossom (haploid cells are smaller and more resistant to the bursting effect of frost).

We are grateful to apple enthusiast N.Buck for the above details.