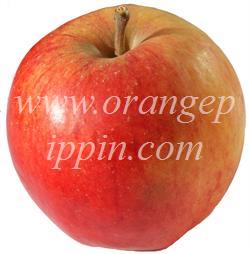 Cheerfull GoldTM is a new English apple variety being released by developers Nuvar, and previously known as NC1.

Unlike most new varieties, it was developed the old fashioned way, and is a cross between Cox's Orange Pippin pollinated by Golden Delicious.  This is a popular combination with apple growers, and has led to some excellent varieties such as Freyberg and Rubinette.

In the case of Cheefull Gold it is quite hard to detect either its Cox or Golden Delicious pedigree, although there is no doubting it is a high quality apple.  The flavour is well-balanced between sweet and sharp, with an attractive tanginess.  There is little hint of the complexity of flavours associated with Cox, but that is not necessarily a bad thing.  The flesh benefits from being more crisp than Cox, and more like Golden Delicious, which is likely to appeal to a wider range of consumers, but it does not snap as cleanly as Golden Delicious.

Cheefull Gold is being promoted as a Cox-style variety for the English market, and thanks to its Golden Delicious heritage, has been found to have much better storage potential.

It is a good variety for attracting deer as the apples stay on the tree into winter.