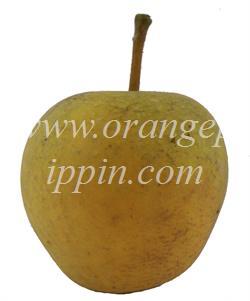 Pitmaston Pineapple is an old English russet apple from the West Midlands area.  It was originally raised as a seedling of Golden Pippin in the late 18th century, but presented to the London Horticultural Society in 1845 by Mr Williams of Pitmaston near Worcester.  It crops heavily but has a tendency to biennial bearing - fruiting only every other year.

Its most notable feature is the unusual and prominent pineapple-like flavour.  The flavour of apples can be most simply defined on a scale from very acidic to very sweet, but many varieties exhibit other flavour overtones on top of this basic axis, and Pitmaston Pineapple is the best example of a small group of apples where a musky pineapple-like flavour comes to the fore.