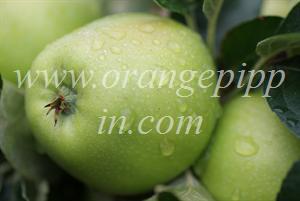 Morgan Sweet is one of those apple varieties that is very well-known in its local area, but nowhere else.

It is usually catalogued as an early-season cider apple.  The "Sweet" in the name almost certainly refers to its role within traditional English cider-making, where cider apples are categorised as bittersharp, bittersweet, sharp, or sweet.

The apples are an attractive green/yellow colour, and the trees are large and vigorous.

It was widely-grown in the cider-growing area of Somerset in the west of England in the early half of the twentieth century.  Your author's own mother grew up in the nearby city of Bristol and had fond memories of eating Morgan Sweet as a child during the second world war.  Like many of the comments on this page, she was surprised to learn it was supposedly a cider apple - at a time when fresh food was in short supply Morgan Sweet was a sweet and tasty treat.  To modern tastes it is probably not that appealing, although it can certainly be eaten fresh.

The ancestry of Morgan Sweet is unknown, but it was well-established in the Somerset area by the 19th century.  It rapidly fell out of favour after the war, but the interest in cider-making ensures it continues to be grown by specialist fruit tree nurseries.