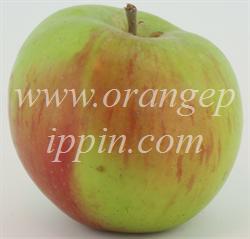 Lane's Prince Albert is one of the definitive English cooking apples.  It was discovered by Thomas Squire of Berkhamsted in the 1840s, and named by him after Prince Albert.  It was subsequently taken on by local nurseryman John Lane and it rapidly became a very popular garden apple variety - and remains so in England and elsewhere to this day.

It possesses the typical qualities of an English "cooker" - a juicy acidic flavour and it keeps very well.  The apples are a good size, but not as large as many other English culinary varieties.  It is an easy tree to grow in the garden, with generally good disease resistance and tolerating a wide range of situations.  The Victorian author Hogg rated it as "a marvellous bearer, and rarely fails to produce a crop" - the apples bruise easily but this is unlikely to be an issue for the domestic user.

The parentage is not confirmed but is thought to include Dumelow's Seedling, which it resembles visually and in keeping qualities.