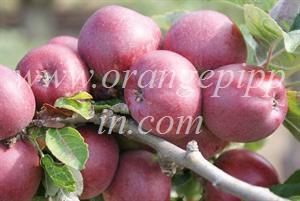 Kingston Black is a small dark red apple, formerly grown in the West Country cider-producing regions of England, and now a popular variety amongst cider enthusiasts.  However it is not the easiest of varieties to grow, generally considered a poor cropper and somewhat prone to disease.

It is worth noting that the word "cider" has quite different meanings in the UK and North America.  In North America fresh apple juice is known as "cider", whereas in England "cider" means fermented apple juice - which is known as "hard cider" in the USA.  Thus most traditional English "cider" apples cannot be eaten fresh, nor is their juice necessarily palatable when freshly pressed - they are grown solely for the production of hard cider.