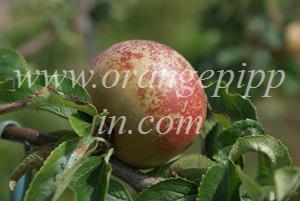 Egremont Russet is a classic English russet apple from the Victorian era.  Whilst russet apples have generally fallen out of favour, Egremont Russet remains popular with discerning apple lovers who appreciate its unique flavour and apearance.

Part of its enduring success is down to niche marketing. This is an apple that dares to be different ! It is a russet-skinned variety with a dry flesh - a style of apple that has not attracted the attentions of mainstream apple breeders, but nevertheless seems to have a dedicated following. Also, inspite of its unique appearance, Egremont Russet has many of the characteristics which mark out a good apple: a harmony of flavour and texture, and a good balance between sweetness and sharpness.

The difference is evident as soon as you pick it up. The skin is entirely covered with "russet", which feels like very fine sandpaper. Some other varieties have streaks of russet, notably Cox's Orange Pippin, but in Egremont Russet it completely dominates the appearance. The colour is an attractive dull gold flecked with yellow.

Egremont Russet is a medium-sized apple. The flesh seems quite dry and gets drier with keeping - it is moist rather than juicy. Traditionally described as "nutty", the flavour is more delicate than most varieties, and quite sweet. Both the flavour and the soft flesh are reminiscent of a firm pear. Yet Egremont Russet is surprisingly versatile, working well in savoury salads for example, and a popular partner for cheese.

If you are used to a modern, smooth-skinned, crisp apple then the sandpaper finish of a russet apple like Egremont Russet may sound distinctly un-appealing, but this is a case of the whole being greater than the sum of the parts. It may be very different, but it undoubtedly works - definitely worth a try !