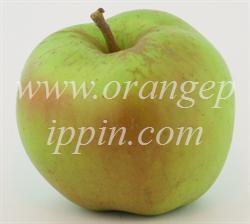 Roxbury Russet is generally recognised to be the oldest apple variety which originated in North America, and its history can be traced back to the colonial era.  It is very probably a seedling of an apple variety brought over by early settlers from Europe.

One of the most fascinating aspects of the development of apples in North America is that very few of the original European varieties adapted to the climate.  Hence most of the apple varieties that became popular as the United States spread westward were grown from seedlings (often of European varieties at first) which had proven more suited to the local conditions and thus been propagated further - this is one of the useful consequences of the fact that apples do not grow true from seed.  Roxbury Russet also has some resistance to cedar apple rust and fireblight, which are prevalent in some of the eastern states.

Roxbury Russet is in most respects typical of that group of apples known as russets.  Although it has some tartness it is like all russets a fundamentally sweet apple.  It is also a fairly good keeper, an important attribute before the advent of modern storage methods.  Visually the extent of russeting can vary considerably, in some seasons and on some trees it can be extensive, whilst in other situations there may be very little.