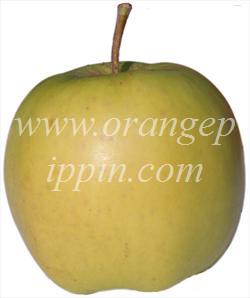 Grimes Golden is a 19th century apple from the USA.  You may not have heard of it, but if it looks familiar it is not surprising - this is almost certainly the parent of Golden Delicious, and therefore a distant ancestor of a great number of the apple varieties on this website.

One of our listed suppliers, Stephen Cummins of Cummins Nursery recalls his Great Grandfather planted 20 acres of this variety at the start of the 20th century - a good illustration of how important this variety was commercially at that time.  However, by the 1930s its success had waned, as growers turned to its offspring Golden Delicious instead, which offered more consistent production and higher yields.  If Grimes Golden has a weakness it is its irregular production.

The main characteristics of Grimes Golden, which are also found in Golden Delicious are the clean dry finish, very slight russeting tendency, somewhat prominent lenticels (the attractive speckles on the skin) and the slightly tall shape with a hint of ribs.  The long stalk, which often remains attached to the fruit after picking, is generally a reliable indicator of Golden Delicious / Grimes Golden heritage in all its offspring.  Even Rubinette, that most Cox-like of Golden Delicious crosses, has the familiar long stalk.

Grimes Golden is one of a relatively select group of apple varieties that are self-fertile.  Golden Delicious is not self-fertile, but is usually considered partially self-fertile.