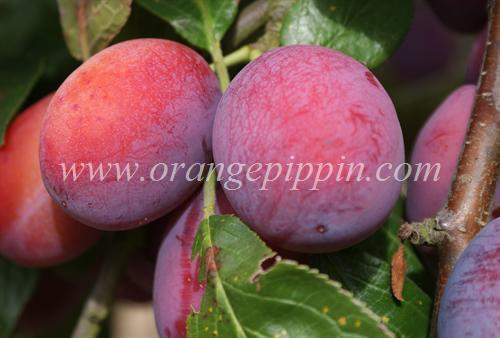 The Victoria plum is by far the most popular plum variety in the UK.  It is also probably the most popular fruit tree of any species sold in UK garden centres, being self-fertile and well-known for heavy crops of very attractive fruit with a lovely red-plum colour.  English gardeners wanting to grow a plum tree tend to look no further, and with good reason.

As the name suggests, Victoria dates from the Victorian era but not much is known about its origins.  It was introduced in the 1840s and rapidly became a popular garden and commercial variety - a position it has maintained ever since.

Victoria really excels as a culinary plum.  It cooks to a distinctive pink/orange puree which makes very good jam and a good-flavoured filling for pies and crumbles.

Victoria plums are sometimes considered inferior to other dessert plum varieties for eating fresh.  However this assumption is probably based on the poor flavour of shop-bought Victoria plums, which are usually picked far too early.  The trick with Victoria is to leave the plums on the tree until they are fully ripe - the skins will start to become a darker red rather than the more usual orange flushed colour.  At this point the flavour, whilst not perhaps comparable with the best dessert plums, should not disappoint.  (However, if you are intending to use the plums for cooking with, then it is best to pick them slightly under-ripe).

This combination of excellent culinary qualities along with pretty good flavour for eating fresh makes Victoria one of the most versatile English plum varieties.  However Victoria suffers from two serious problems.  Firstly it has very poor disease resistance to the plum disease silverleaf.  This is a fungal disease that enters through open wounds in the bark, and for this reason Victoria plum trees, like all plum trees, should never be pruned in winter - in fact it is best to avoid pruning entirely with this variety.

Secondly, the wood is brittle, and given its tendency to over-crop, tends to result in branches breaking under the weigh of fruit - which of course are then exposed to disease infection.

Growing a Victoria plum tree is therefore a good way to gain first-hand experience of silverleaf.  However whilst fruit trees that are prone to disease are often best avoided, paradoxically, Victoria is a very easy variety to grow - the inherent heavy-cropping capability means the tree tends to keep going regardless of the inevitable disease and broken branches it accumulates within a few years.  It is therefore a very good choice for the gardener who wants to grow fresh plums, (although given its tendency to lose branches, perhaps not as a specimen tree).