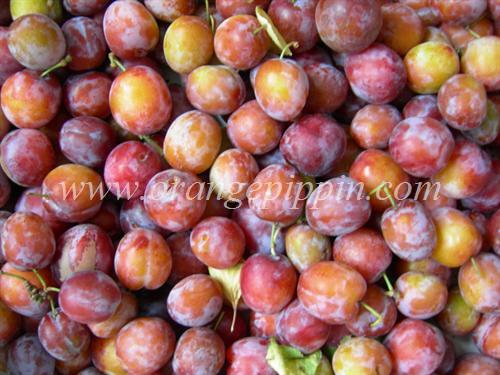 Opal is probably the best-flavoured early plum variety - indeed it is sometimes called a gage-like plum thanks to the excellence of its flavour.  It demonstrates (along with Ariel) that crossing a gage with plum can improve the gage-like flavour.

However the flavour depends crucially on developing sugars during the short growing period, and in the UK and northern Europe Opal really benefits from being grown against a south-facing wall or in a sunny aspect.  In less favourable situations it will still give good crops but the flavour may be bland.

The fruit is medium-sized, coloured dusky red with a heavy bloom, becoming blue when overripe.  The fruit is at its best just before the colour changes to blue.  The plums ripen over a period of about 1-2 weeks, so you don't have to deal with a glut.  The flesh is straw-yellow and fairly juicy.  Opal is a free-stone plum - the stone falls away easily from the flesh.  If picked on a warm July day and placed in a fruit bowl Opal also has a wonderful aroma.

Recommended because it is easy to grow in a variety of climates and provides good quality plums early in the season - but to get the full flavour it is essential to thin the crop, and to plant in a sunny aspect.