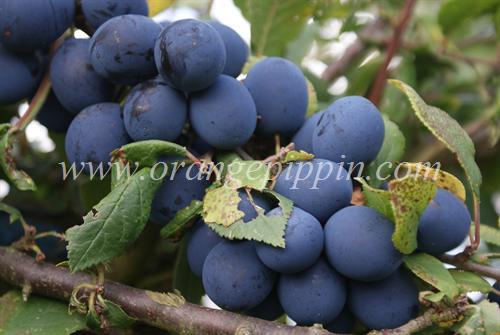 A classic English damson, still widely grown in gardens in Kent where it originated in the early 19th century.  Farleigh is one of the toughest fruit trees, and can be productive even in cold or wet climates which would be unsuitable for most other orchard fruits.

The fruit is a bit smaller than some other damsons (notably Merryweather) but cropping is heavy and consistent.  Farleigh also has the typical rich damson flavour and is a versatile culinary fruit.

In Kent Farleigh is sometimes known as Crittenden's damson, after a Mr Crittenden of Farleigh, who discovered it growing wild in the early 19th century.  The famous Victorian author Hogg refers to it by this name, and regarded it as "the best of all damsons".  Hogg also states that Farleigh is the largest of the damsons, but by modern standards Farleigh is generally considered medium or small, particularly given the popularity of the much larger Merryweather damson which was discovered at the start of the 20th century.