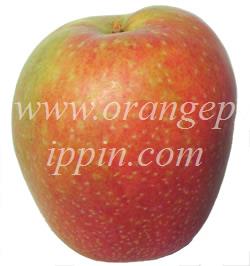 Adams's Pearmain is a an old-fashioned late dessert apple, one of the most popular varieties in Victorian England, probably originating from Norfolk. It has an attractive 'pearmain' shape.

This is a fairly dry apple - which is perhaps not regarded as a desirable attribute today. Inspite of this it is actually a very enjoyable apple, with a rich aromatic flavour which in apple terms is usually described as 'nutty' - a quality it shares with another popular Victorian apple, the Egremont Russet.

There is some evidence that Adam's Pearmain is a triploid variety, with 3 sets of chromosomes instead of the usual 2 - or perhaps a partial triploid.  However it does not possess many of the typical features seen in triploid varieties (such as large size and vigour).

Although it had 'shelf appeal' for the Victorian housewife, its autumnal colouring is probably too subdued to compete with the bright young things of the modern supermarket shelves. Perhaps this is part of its appeal; it recalls a bygone era where subtlety of flavour was appreciated - a lovely apple to savour in front of an open fire on a cold winter's day.