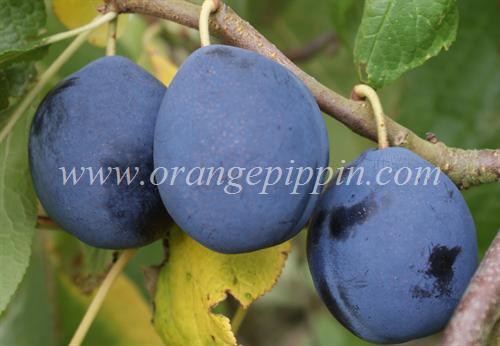 Merryweather is one of the most widely-grown of all damson varieties, being easy to grow, and producing good crops of classic damson-flavoured fruit.

Inspite of this popularity, some authorities question whether Merryweather is a true damson since it has many plum-like characteristics.  H.V. Taylor in his definitive book "The plums of England" considered it as a hybrid damson / plum - but went on to say he felt it was probably the best of all damsons for gardeners.

By damson standards the fruit is large - more like a small plum in fact.  Merryweather grows like a plum too, with a spreading habit rather than the more vertical habit often seen in damsons.  It also comes into bearing earlier in its life than most damsons.  Again unusually for a damson, the fruit can be eaten fresh if left to hang on the tree - although, like all damsons its true home is in the kitchen where it is one of the most versatile of culinary fruits.

Inspite of this interesting debate about its origins, Merryweather can be classed as a true damson for a simple reason - it has the distinctive astringent flavour which is the hallmark of the damson.  Like most damsons it is also a hardy tree, in fact Merryweather is a tough tree even by damson standards and can thrive in very difficult situations.