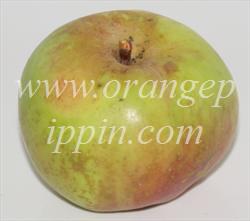 Decio is a very old apple variety, believed by almost all sources to have originated in Roman times, albeit with little evidence. However there is more certain evidence of its existence in Italy in the Middle Ages, so whatever the origins it is clearly a very old variety, and probably the oldest currently available apple variety in existence with any kind of history before the 17th century.

Decio is a small apple, mostly green, but with a red flush. In the UK it should not be picked until late in November (perhaps suggesting that it does come from a warmer climate ...), and it will keep well into the following year. The flavour is lacklustre, and there is not much juice. The flesh is fairly soft, yet quite dense. For all that, it is perfectly palatable.

Decio is clearly a very primitive variety and therefore fascinating to compare with modern apple varieties from the late 20th century. In many ways this is a bit like comparing the Wright Flyer with Concorde - both aeroplanes, but the technological gulf between them is enormous. Decio is simply out-classed in every way by almost any modern apple variety, and by modern standards has little to recommend it. However its appeal lies in its history, and there is apparently still some demand from gardeners who want to be able to eat the same variety that was perhaps enjoyed by the Romans, and a number of specialist fruit tree nurseries still supply it. Unfortunately it is not known if Decio is a direct ancestor of any more recent apple varieties.